by Lieven Martens Moana / Dolphins Into The Future 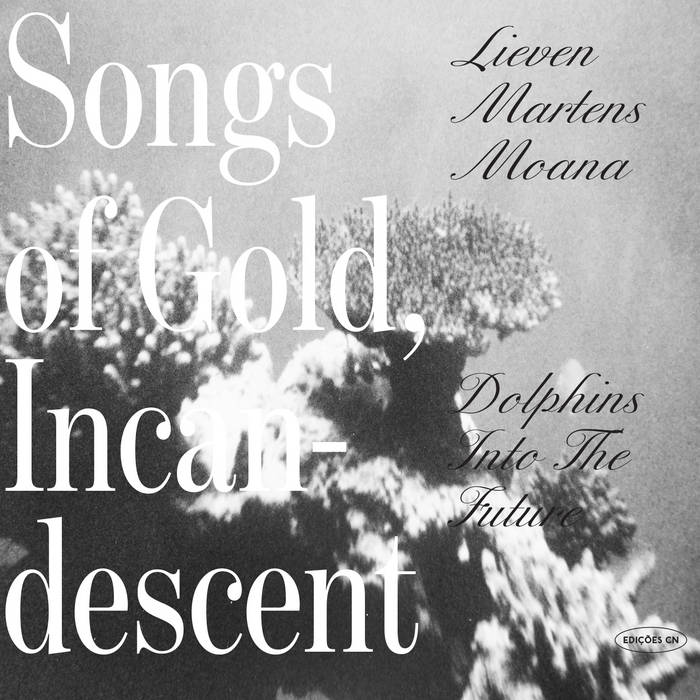 Songs Of Gold are small portraits, culled from compilations, limited run cassette releases, choreographies, and singles. Some pieces were worked on for a length of time, others materialized in just about one take. All the songs are derived by an encounter with an object, a place or a person. Or by a combination of these. The events are translated into the work through the intermediary of symbolic sounds and notes. There is no thematic link between the compositions.

I. CULATRA ISLAND (2010)
When solid and fluid embrace. On a sandy beach in South Portugal.
II. A TREATISE ON HOT WATER, VERSION (2011)
A location recording, tracing the boiling water in a fumarole to a counterpoint of its surrounding fauna. The frogs and one of the birds you hear on this track, were only dwelling around these steaming vents, nowhere to be found on the other parts of the island. Thus these animals create their own small island, inside.
III. SWEETEN THE MANGO (2012)
Circumstances... A bar, hidden in
a thick forest bordering a vast lava plain. The barkeeper fronts a small exhibition—a few panels of newspaper clippings—on the independence movement. On one of the panels, in black marker, someone wrote a few lines of Missionary Graveyard, a poem by Haunani-Kay Trask, a Hawaiian poet, academic and activist. Next to a faded sticker of the Shaka sign. Outside the bar, a white dreadlocked hippy plays the ukulele. Coqui frogs are chirping in the background. This song is an investigation. A missionized hymn,
a melancholic piano vignette, and the church bells, counterpointing island fauna. A question mark.
IV. GROTTELLE (2013)
Three years ago, while travelling through the Pontine Islands, I witnessed a young—and presumably rich—woman snorkelling. In an absurd yet beautiful tableau, she was floating innocently, while being flanked in the water by her two servants wading clumsily through the reefs. A set-off with former times, when these latitudes—of volcanic origin—where used to exile dissidents, both in Ancient Rome and during the 20th century under the former Italian fascist regime. Grottelle is a vignette about a leeward bay on Zannone Island, one of the smaller Pontines. Based on these sounds Siet Raeymaekers,
a dancer, invented movements and gestures. Thus reproducing an actual picture of this remote bay. And a portrait about banishment...
V. THE GECKO (2014)
In Le Labrene, a short story by Tommaso Landolfi, the narrator becomes paralyzed when a gecko drops on him from the ceiling. He remains sentient while being in suspended animation. His surroundings believe him to be dead thus act as he isn’t there anymore. The narrator though, in his paralyzed vessel, hears everything that happens around him, and is witness to grotesque scenes of underhand gossip and attempts of adultery. The image forms an odd variation on the last moments before the attack, when the gecko scrutinizes its prey.
VI. A HIMENE TARAVA FOR PAUL GAUGUIN (2012)
The Great Darkness of Paul Gauguin. Framed into a beautiful mockery by inhabitants of Bora Bora, Society Islands. The Himene is recorded by me outside a small bar, in one of my least favourite cities in the world—Paris, France. The singers didn’t look like they fell out of one of the paintings by the protagonist.
VII. LAVA (2013)
The volcanic eruption. Burning lava flows. The black void of the lava beds. The electronic waves in this song create a lively afterimage. Lava is an extended mix of the middle section from The Bells From Above, a sound collage in three parts.
VIII. TRADEWIND (2015)
The metaphorical winds, created for an exotist compilation...
IX. THE MELODY OF TAGALOAALAGI (2014)
“In Samoan mythology, Tagaloa (also known as Tagaloa-lagi or Tagaloa of the Heavens/Skies) is generally accepted as the supreme ruler, the creator of the universe, the chief of all gods and the progenitor of other gods and humans. Tagaloa dwelt in space and made the Heavens (lagi), the sky, the land, the seas, the fresh water, the trees and the people. Samoans believed Tagaloa created nine heavens (lagi tua iva). After Tagaloa made the islands, the humans developed from worms. The arrival of missionaries and Christianity in Samoa from 1830 saw the Samoan atua gods like Tagaloa, replaced by a Christian deity.” (Wikipedia)
X. CORAL GROUPS (2015)
A live concert piece for 32 channels with an undefined duration.
Various found objects, electronics, piano vignettes and field recordings are put into relation with each other in an improvised way, creating a panorama that's both random and directional. I presented this piece between early 2013 and spring 2016, in Finland, Sweden, Japan, Mexico, United States, Italy, Germany, Denmark, United Kingdom, Belgium, among other.
The excerpt here has been recorded close to the final performance of the piece, when things started to come together quite naturally. Recorded live at Gold+Beton Gallery, Köln, Germany, november 2015.
XI. PĀ'UA (2014)
Humble is the melody / which flows the giant clam
XII. A SUBTLE LANDSCAPE (2014)
A pitch-to-midi pattern, loosely created through a landscape. The recording of its sounds and flaws, through programming and editing, triggers an arpeggiated GM-xylophone sound. Lo!, a direct take on Programme Music.

... derived by an encounter with an object, a place or a person. A variety of events, transposed into songs. Recorded in Antwerp and on location, 2010–2015.