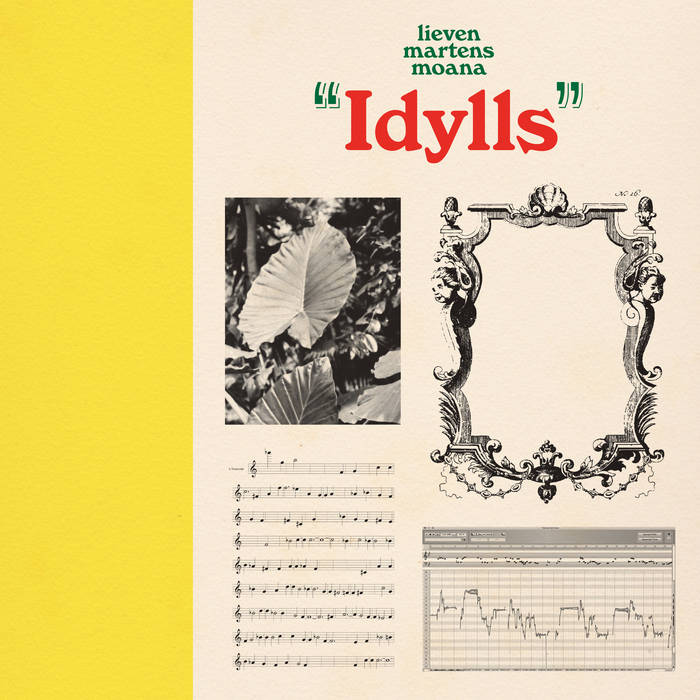 Since Lieven Martens Moana's (Dolphins Into The Future) last lp, the massively overlooked "Music from the Guardhouse", our composer has moved from the islands of Okinawa to the Swampland of Mexico City to the Portuguese countryside, running his Private Press, and composing music for ensemble and commercials. This very pluralistic life-style and commitment has led us to his first full length record in three years: "Idylls". Presented as a 12 page book with an LP disc, the listener first hears concentrated and intentional sound-prose poems of the life of Robert Louis Stevenson as Martens attempts to "see through the eyes of RLS". Because of Martens ability to poetically reflect Stevens' obsessions, we can hear field recordings, not just as documents, but as compositions and imaginative story-boards of a poets journals in the locales of Polynesia. As we flip sides we enter into the colorful and active aspect of Marten's palate.

Flowing from active electronically treated thumb piano to tranquil serene alien piano, growing towards a rumbling volcano and settling into archaic Goldberg Variations by Mia Prce of Miaux, the listener is now startled by Captain Moana's refusal for his music to be pure inspired decoration, but instead a world of prose and storytelling. By now, we ask ourselves what has changed in the music of Lieven Martens Moana? Its is for certain on "Idylls", that with a Polynesian Fascination seemingly unchanged, the intellectual palate has grown so much, that what we have in front of us, are wildly colorful and intellectual compositions that seem to have arrived from a literary mode, and grown into pieces that have an illusively romantic allure. The uniqueness of "Idylls" rests upon the artists willingness to arrive at strange and difficult compositions by way of natural story-telling and inspired readings; Martens further exacts his process, away from just appreciating Polynesia, and into the act, that Gaugain and Stevenson might have enjoyed, of symbiotic immersion. We can for certain hear from the Captain himself:

"Being("Idylls") a portrait, an ethnographic study, an exotic illustration and a ritual. The latter used in the most mundane sense ever, since I’d like to stay far away from a sensational bubblegum approach to (religious) ethnography, to the copying of ethnic behaviour, or to approaching it as something odd or weird. These behaviourisms unavoidably invoke the end of all rituals, thus making the world a duller place. As being interested in the exotic, (c.q. the exotist), an act under constant scrutiny, it is a duty to observe and sustain, to withdraw and refrain.”

Pacific City Sound VIsions is extremely stoked to present the new works by Lieven Martens Moana, in the year 2017, as we continue to grow and expand with an artist revelling in pushing his initially beautiful instincts to a point where they begin to be outright living intellectual endeavors.

"Wonderful side of spare piano airs, south Pacific instrumentation and field recordings from Lieven Martens (Dolphins Into The Future), based on the writings on Robert Louis Stevenson..." (Boomkat)

"As it were, Lieven Martens Moana begins Idylls on Pacificity Soundvisions with an overture. Stumbling to afoot balance, drifting. A drift. Alone. Witnessing the song of solo. A character in multiple characters manipulating the conscious character. That bashed brain chimpanzee-Shakespeare concept. Architecture without. Idylls is In a Silent Way, deserted on a rotating island in an ocean of GJ 1132b, thousands of cryogenic light-years from now. Where genius is found of self but nobody’s around to witness, so genius compels genius in an ouroboros of contentment.
Some releases are so incredible we just can’t help but exclaim EUREKA! While many of our picks here defy categorization and explore the constructed boundaries between ‘music’ and ‘noise,’ others complement, continue, or rupture traditions that provide new forms and ways of listening. " (Tiny Mix Tapes)

“Field recordings are often more about listening than recording, and nobody listens like Lieven Martens Moana. As Dolphins Into The Future, he blended new age, early synthesizer music and tropical field recordings making one-of-a-kind soundscapes during the noise boom of the mid-2000s. Now, under his own name, his music is even more poetic.” (Fact)

"Idylls presents us with a series of abstract sound landscapes that move cross-continent. Natural/field recordings - layered and sequenced with electronic and acoustic instrumentation - add a sense of otherness to the experience whilst seeming grounded in a factual language. Each sound is presented on an equal footing and by doing so removes any presupposed context from the listener - the sound of static, wildlife, a piano, synth, rain, water and people can be heard objectively and in sequence together.
Famed Designer Milton Glazer’s take on the defining characteristic of what art is comes to mind when listening to Idylls, and that one purpose of art is to move the viewer towards attentiveness. Although dealing in the visual language this can be of course be applied to any medium, however, after listening to Idylls, you feel you have really seen something - experiences and memories overlaid that contain the content of someone and something else. It’s an exotic world of elegance, precision and non-sensationalist beauty presented in a flowing narrative. In short, it’s a privileged place to visit. (Cultural Bulletin) www.culturalbulletin.com/cultural-bulletin/2018/3/25/idylls-by-lieven-martens-moana "